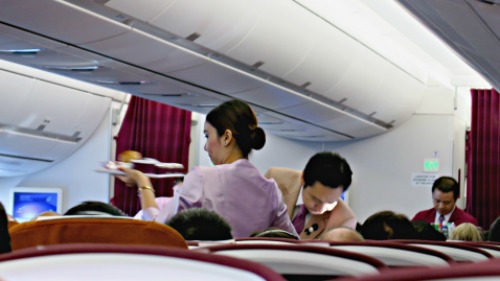 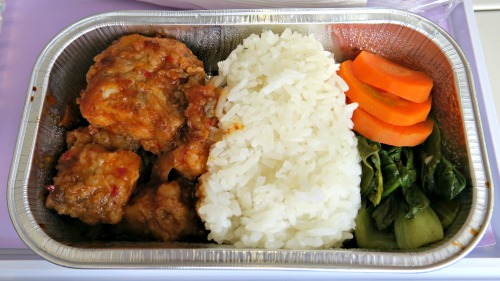 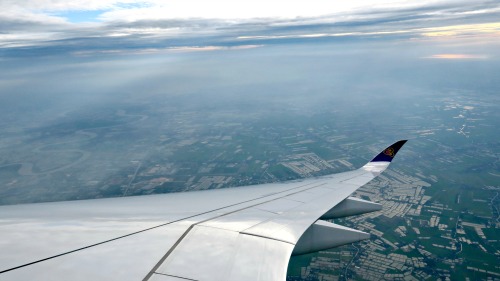 Thai Airways has been operating its new Airbus A350 XWB aircraft on two of up to five daily flights between Bangkok and Singapore. With a scheduled flight time of 2 hours and 20 minutes, a quick trip to Bangkok would enable me to enjoy an immersive "sampling" of this state-of-the-art airliner.

And so it was, I booked myself on A350 XWB-operated flights both-ways for my Bangkok trip, in the event Thai Airways decide to substitute one of my flights with another aircraft type, which would effectively defeat my purpose of my trip.

My return flight TG409 from Bangkok to Singapore has the following schedule:

The operating aircraft is (thankfully, as scheduled) an Airbus A350-941, with registration HS-THC. Thai Airways names individual aircraft and this particular aircraft is named "Si Nakhon".

Promptly as per schedule at 3.55pm, boarding call was made for passengers, in order of priority. Once eligible, I made my way to the aircraft and was warmly welcomed by two flight attendants in their colourful traditional dress, which was a great first impression. There were a variety of newspapers and magazines in the galley for passengers to freely pick on the way to their seats.

The seat offers a 32 inch seat pitch and an 18 inch seat width - pretty normal for industry standards. A footrest and a pillow provided additional comfort for the passengers. There is also an 11 inch entertainment touchscreen which features an awesome tail camera that shows the sheer grandeur of the A350 aircraft (a big plus point!). In addition, there's a USB port and an AC power port for to recharge personal devices - very handy because there is Wi-Fi available onboard!

Wi-Fi (THAI Sky Connect) was available during the flight for all passengers at the following rates (according to Thai Airways' website), and is payable with a debit or credit card:

Though it was a full flight, boarding was quickly completed, owing to the attentive Thai Airways cabin crew who actively showed passengers to their seats and assisted them with settling in. They were also seen assisting in storing passengers' jackets, even though there's a coat hook on every seat. Aside from two lady cabin crew who were welcoming passengers at the door, it was an otherwise an all-male team working in the 289-seat Economy Class cabin.

We soon took off and it was a very graceful take-off and sharp ascent into the evening sky. After enjoying the great views of Thailand's ricefields under the sleek A350 wing from my window, I played with the entertainment system, which I found highly responsive. There were a good variety of Hollywood and international movies. I decided to watch a Thai comedy, "Suckseed".

After the immigration forms were distributed, meal service commenced. An announcement was made for passengers to put up their seats for the consideration of others, and an apology was made in advance, should passengers were unable to receive their choice of meals.

The main course of deep-fried snapper with chilli paste, with Thai "Hom Mali" rice, served with carrots and Taiwanese cabbage was accompanied by a chicken ham and pasta salad in mayonnaise dressing, a wholegrain bun, and blueberry mousse cake. There was also a 330ml mineral water bottle on the tray, which was a nice touch as it could be saved for drinking later during the flight.

Another flight attendant came back with the drinks trolley (probably after all the meals have been served). I noted there were a full range of beverages, including beers, wines, and spirits on the trolley. Flying on Thailand's national airline, I decided to go for Chang beer to wash down the spicy fish dish.

Later, the flight attendant came around offering coffee and tea, seeing that wines were available, I requested for some red wine, which was graciously acceded to, with a smile.

After the meal service, as darkness grew, there were some turbulence encountered during the cruise over Malaysia. After switching on the seatbelt sign, the Captain was quick to update the passengers, which was nice. The turbulence was mild and passing.

Soon it was time to descend into Singapore, a customs video was screened before the cabin lights were dimmed. Soothing music was played all the way until arrival at the gate, which was very nice. Landing was smooth but the aircraft hit the runway pretty hard, resulting in fellow passengers holding the seats in front of them. I'm pretty sure the hard landing was quickly forgotten with the soothing music in the background.

At disembarking, the cabin crew at each door attentively bid farewell to each passing passenger. It was a truly excellent service by Thai Airways from boarding to disembarking.

What I like about my Thai Airways A350 XWB experience is how traditional Thai hospitality is intricately combined with modern state-of-the-art technology. From the authentic Thai cuisine served to the colourful traditional dress of the lady flight attendants to the ingenious handy water bottles pre-set on the meal trays, these little touches of the legendary Thai hospitality is omnipresent onboard the modern Airbus airliner. Even though it was a short 2 hour flight with a full load in Economy Class, the flight attendants conducted two drinks rounds, which was more than exemplary service!

Even though other airlines also operate the A350 XWB aircraft, I found that Thai Airways has redefined the A350 XWB flying experience with its unique Thai hospitality - a combination of intimate attention to the service details and staying true to its Thai heritage. This traditional Thai hospitality really gels well with the state-of-the-art Airbus A350 XWB to create a holistic customer-centric experience that is well, Smooth as Silk. Deservingly, Thai Airways is one of my favourite airlines.

For the full experience of my A350 XWB TG409 flight with Thai Airways, please see below:

Thank you for reading this flight report of Thai Airways.

For collaboration and enquiries