Between the ME3, Etihad Airways operate just a modest 1x daily flight to Singapore compared to Emirates (4X daily) and Qatar Airways (3X daily). When the opportunity arose to fly Emirates or Etihad, I decided to go for Etihad Airways as I figured I would get more opportunities to fly Qatar Airways or Emirates given their more frequent schedules from Singapore. After meeting the nice Etihad flight attendants and experiencing the friendly Etihad inflight service, I didn't regre
514

China Airlines 5th freedom flight experience from Singapore to Surabaya, as a continuation of flight CI751 from Taipei. Read the full CI751
191

Flying China Airlines on this 5th freedom flight from Surabaya to Singapore has been on my bucket-list for the longest time now (China Airlines has been operating this flight CI752 / CI751 for many years, as an extension of one of its double daily flights from Taipei. Flight Details Operator: China Airlines Flight: CI752 Route: Surabaya to Singapore Operating aircraft: A330-302 Registration: B-18351 Departure from Surabaya: 6.05am / 6.25am* Arrival in Singapore: 9.25am / 9.14
247

Mabuhay! Welcome to this flight review of Philippine Airlines, on a transpacific flight PR101 from Honolulu to Manila (HNL-MNL) in Economy C
643

I was frankly very excited about this Scoot flight - even though it has a not so favourable arrival time of 2.05am(!) in Guangzhou, this flight will certainly spice up my travel journey with its two firsts for me: first flight on the Boeing 787-9 Dreamliner first flight in ScootBiz Flight Details Operator: Scoot Flight: TR106 Route: Singapore (SIN) to Guangzhou (CAN) Departure from Singapore Changi Airport Terminal 2: 9.55pm / 10.11pm^ Arrival in Guangzhou Baiyun Internationa
2,833

Singapore Airlines is the first operator of the A380 superjumbo, with the maiden flight to Sydney in October 2007. Ten years later, in November 2017, Singapore Airlines has unveiled new A380 cabin products that would span across all classes of travel, to be fitted across its entire new and existing A380 fleet. In anticipation of the new A380 cabin products that would debut on 18 December 2017 on SQ221 (Singapore to Sydney), here is a look at the original A380 Economy Class ca
3,289 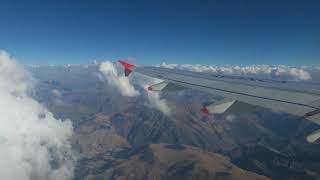 It is the holiday season again and it is time to travel! Travelling is always fun but it can be stressful at the same time - especially when airlines lose or damage our baggage. I had a bad experience when flying a domestic flight from Cusco to Lima and ended up stranded without my luggage for over 36 hours. I wouldn't have thought it would happen to me on a one hour domestic flight (who ever thinks bad things would happen to them!) but it did, and you could safely say that i
200

It has been a year since I last flown with Singapore Airlines, and I have been looking forward to experiencing Singapore Airlines' retrofitted Boeing 777-300ER on a short weekend jaunt to the wonderful dining and shopping mecca, Hong Kong. While I had expected a superb B777-300ER cabin product, I was quite blown away by the quality of inflight services and hospitality rendered by the polished Singapore Airlines cabin crew team on this flight, and I was travelling in Economy C
5,088